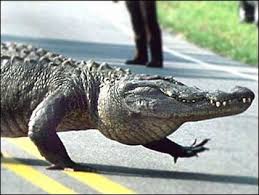 Okay I don’t like Gators! That’s why when I see them on the menu at a restaurant I’m likely to order Gator Bits,  I enjoy eating these damn predators.

If you see a pond around these parts, I can guarantee you have a Gator living in it. I live in River Club at Lakewood Ranch and a six foot long Gator loves sunning on the banks of our retention pond, right behind my house. I’ve had a few of my Taxi customers tell me they have run into gators on the sidewalk during their pre-dawn walks. Also its common to find them sunning on our golf courses!

Alligator  attacks are still extremely rare. In fact, a unprovoked alligator attack is roughly one in 2.4 million. HOWEVER, with Small dogs and Little Children it is much more common. Case in point; the Disney tragedy that took the life of Lane Graves, the 2-year-old, who was attacked and killed by an alligator near a Disney resort last year

The maximum speed for a sprinting human is around 20 miles per hour, and most reasonably fit humans can exceed 10 mph for a short distance. It’s possible that some small alligators might get as high as 25 mph for a short burst, but large alligators generally can’t get above 7-8 mph.  When alligators are in the water, they sometimes can go as speedily as  20 mph.

Don’t believe that old tale about running in a zigzag fashion to throw off the gator. “The shortest distance between two points is a straight line, and that’s the fastest,”  alligators can move quickly on land — but only for short distances.      BUT, Alligators are not known to give chase.
They do not hunt by chasing you down,  it’s usually the initial burst and that’s it.

In the unlikely event that you come upon an alligator, consider Frank Mazzotti advice, a wildlife ecology and conservation professor and alligator expert at the University of Florida’s Fort Lauderdale Research and Education Center

5 ways to avoid, or survive, an alligator attack

—Don’t feed it:“That can cause trouble,” Mazzotti told the Los Angeles Times. “When you do that, the alligator doesn’t know where the handout ends and the hand begins.”

—Avoid a gator’s territory: “If you see alligators in the water, don’t go in there. I know this sounds like common sense,” Mazzotti said, but it’s a tip that many people ignore. Alligators do not consider humans to be prey in part because of their size, he said. But a splashing human’s arm or leg can be mistaken for smaller, vulnerable prey in the water, such as a raccoon or possum.

—Watch the weather, and the calendar: The teenager who jumped into the river might not have known that this is the tail end of alligators’ mating and egg-laying season. Or that recent rains tend to make alligators more active. “The males and females have been spending lots of time with reproductive activities, so they are hungry. With that, and the rainfall, that only makes them more active. And since they are moving around more, that brings them in more frequent contact with people.”

—Run (in a straight line): If you find yourself face-to-face with a gator, get out of the way. Fast. And don’t believe that old tale about running in a zigzag fashion to throw off the gator. “The shortest distance between two points is a straight line, and that’s the fastest,” Mazzotti said. True, alligators can move quickly on land — but only for short distances. Run, and do not slow down, he said. If the alligator is attacking because you have trespassed into its territory, it just wants to run you off — not hunt you down, he said. “Run away in a straight line. Everything you hear about running in a zigzag line is untrue.”

And run in a straight line.